Exploring the wider social and economic background to passage tombs is a challenging task. On the one hand, tomb assemblages are often disturbed and/or depleted, with varied preservation of archaeological remains across different regions. On the other hand, well-preserved and well-excavated passage tombs generate very extensive archives that can take many years and large budgets to fully process. Compounding this, the contemporary settlement record is sparse and frequently ephemeral, restricting our view of where and how people lived and how they sustained themselves.

How will Passage Tomb People work around these issues? By scaling up and zooming in at the same time! Large, systematic programmes of molecular-level analysis will be undertaken on nearly 400 human and animal specimens, several thousand bone fragments and 500 pottery vessels from passage tombs and contemporary sites across Ireland, Orkney and Wales. The project uses an analytical ‘toolkit’ tailored to the surviving archaeology of different passage tomb regions to get the best results. 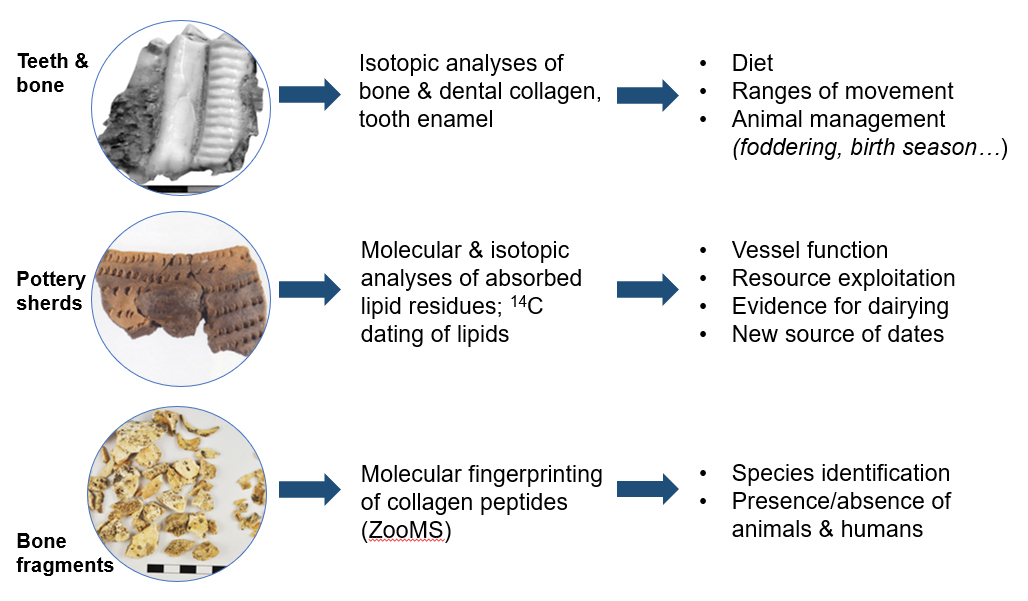 Investigation of prehistoric subsistence and farming practices has been revolutionised by stable isotope analysis, with techniques tapping a wide range of chemical markers in human and animal tissues and revealing otherwise undetectable information on past lifestyles.

δ13C and δ15N isotopic analyses of collagen: Carbon and nitrogen isotope values of collagen in bone and dentine can provide information on diet, subsistence and the broad types of environment exploited by a given population, based on the ‘you are what you eat’ principle. For example, significant levels of marine resource consumption are reflected in higher δ13C and δ15N values in the collagen of individuals (relative to values from purely terrestrial diets). Adult human bulk bone collagen provides an average of many years’ diet, while incremental sampling of collagen from dentine can identify dietary patterns over very short periods of an individual’s early life. Together, the relative proportions of protein from terrestrial/aquatic and animal/plant sources consumed by different human groups can be explored. Similar analysis on animals can provide important information on foraging behaviour, as well as providing baselines for human diets.

δ18O and δ13C isotopic analyses of animal tooth enamel: Incremental sampling of animal tooth enamel can provide additional insight into the birthing seasons of livestock and temporary shifts in diet. Seasonal variation in the δ18O values of water ingested by livestock is locked into the developing tooth enamel of young animals. Because the timing of tooth development is more or less fixed within a species, seasonality of birth can be investigated through sequential sampling along the tooth growth axis and reconstructing this δ18O record. The δ13C values of tooth enamel provide another window on animal diet, with sequential sampling allowing seasonal shifts in δ13C values to be detected. In Orkney for example, seasonal seaweed foddering of sheep was found to be present at c. 3000 BC, contemporary with passage tombs, but not in earlier horizons c. 3600 BC. Were such specialised animal management strategies more widely used?

87Sr/86Sr isotopic analyses of animal and human tooth enamel: An additional strand of isotope analysis addresses the issue of connectedness among passage tomb communities. Strontium isotopes travel from weathering rocks, waters and soils into the food chain, and ultimately into the skeleton of local humans and animals. Adults whose teeth have 87Sr/86Sr ratios different to that of the geology underlying their place of death must have moved to that place since infancy (when strontium gets locked into the tooth enamel). 87Sr/86Sr analyses will examine the extent of distances passage tomb people and their animals travelled in their lifetime. A significant number of strontium values outside the local range of the site may indicate a greater degree of organisation and use of the landscape for farming and settlement in the later Neolithic, with a high level of connectivity between farming groups.

The porous fabric of unglazed pottery absorbs and preserves the lipid residues of animal and plant products processed in them. Where bone and teeth are absent, or collagen is too poorly preserved, organic residue analysis of these lipids provides a powerful proxy for resource exploitation and subsistence regimes. In European Neolithic pottery, animal fat residues are the dominant (>90%) category of organic residue detected. Molecular and stable isotopic techniques can identify the fats of the major classes of domesticated animals, i.e. ruminants versus non-ruminants, dairying fats and of some hunted terrestrial species. More recently, marker compounds have been identified that allow the processing of fish and other aquatic resources to be detected. In northern Britain, lipid residue data indicates that Neolithic communities did not process such aquatic resources in pots and our project will explore whether this was the case in other regions. In the absence of animal bone and herd profile data, organic residue analysis will also be used to infer the extent of dairying and the processing of milk products among passage tomb communities. Lipid residues in pots also offer a unique source of short-lived 14C, derived directly from the commodities processed in the vessels. These will be used to date sites and contexts where other sources of 14C (bone, plant remains etc) do not survive.

Identification of animals in the archaeological record is most often based on bone morphology. Where bone is too fragmented to identify morphologically, tell-tale markers can still exist in the bone collagen peptides. Collagen fingerprinting or ZooMS is a method that exploits the mass spectrometric discrimination of collagen peptides to identify domesticates such as cattle and pig, non-domesticates such as deer and other ungulates, as well as humans, a range of marine mammals and even micromammals such as rodents. ZooMS requires only small amounts of sample (4–10 mg of bone), which makes it minimally destructive, while low analytical costs and high throughput also make ZooMS very suitable for full fragment analysis. This means that sites with assemblages consisting solely of indeterminate bone fragments – very common in our chosen study regions – can be included in qualitative studies of animal exploitation and subsistence regimes.